Because today is Christmas, I began to think back on my year
and particularly Kelsey and her belief in Santa. I admit, I do not add to the
belief either way, because I just feel that when she is ready she will believe
or not, in her own time. Do not get me wrong, she has asked how things are paid
for, etc. I give her the truth… Mommy & Daddy pay for the items that “Santa”
delivers.  My question is at what age,
should the WHOLE truth be told? The innocence of a 9 year old is really
something else, because they understand the differences between the truth and just
imaginary. I cannot figure out if she “believes” because she wants gifts, or if
her belief is really genuine. I personally think that it is a combination of
both.
However, when I see the letter that Kelsey wrote to “Santa”,
it broke my heart. Is her belief so strong that she truly feels that when she
becomes a teenager, she won’t get anything? Have we, as a society, made our
kids feel this way, without realizing it? Is it just better to tell the truth
from the beginning? If I knew the answer, I would be rich LOL JTake a look at the
letter and “Santa’s” response (I think “Santa” was thrown off, a bit): 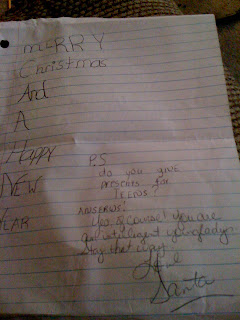 I think that I remember stopping the belief about (or
before) age 10. Christmas was always good as we grew up. I just remember the
sea of toys everywhere, and thought, that my sisters, and brother must have
been good that yearJ.
Of course, in my adult reality, there were 4 of us and it just “looked” like a
sea of toys. Either way, it’s all goodJ.
To be honest, I am not much of a Christmas person, and if it
were not for my children, we would probably not celebrate at all. There is one
memory I have spending Christmas with Anthony and Kelsey (pre-Dudie), when we
went to Disney World (on Christmas day). That day started off well, however, it
quickly turns wet. Yes, I said wet. It actually rained. Not just rain, but a continuous
stream of hard rain for about 5 hours straight. I had never seen anything like
that. I think that has something to do with why we have not gone back for “that
day”. Don’t get me wrong, I would go again, if the opportunity presents
itself.  As an adult, that is one of my
better Christmas memories.
I guess the answer to the question is up in the air for now;
however, I am sure that in the coming year, we will find a way to convey the information to her. Then the issues will be how long the truth should be held from Dudie,
and to make sure that Kelsey does not spill the beans before he is ready.
Something to think about J.
Merry Christmas and Happy Holiday!!