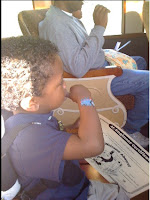 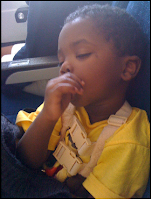 Have you seen the above images on a child/children in your life? Or even on the street or just random?

This is what we have seen on our youngest son since he was 6 months old. Do not get me wrong, I was perfectly fine with him sucking his thumb, because I figured he would grow out of it. As time went on, I did become more and more concerned about germs, etc. Children naturally put things in their mouths (so that is a given). However, because he would touch things (like a public toilet, then ATTEMPT to put the thumb back in his mouth), I realized it was maybe time to stop. Of course, this is provided he was ready.

After Thanksgiving, I finally made the purchase of the ThumbGuard (purchased from OneStepAhead.com ). The cost was $74.95, and I can say (so far) that is was a great purchase. 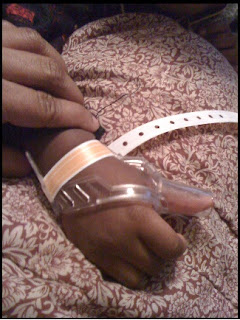 Here is a picture of my son’s hand the day we got the ThumbGuard in the mail. At first glance, I have to admit that it looked strange and I was afraid that the transition would not be that easy.  We started off having him wear it during the day, and took it off at night. That went on for about 2 weeks. After that we began, having him wear it at night. At first, it was some opposition because that is what he used to get to sleep. Thankfully, it was short lived. After a few more weeks, we started having him wear it all day, take it off to bathe and clean the device and put it back on, so that he could get used to not having to rely on his thumb.

I am happy to report that last week, we finally removed the ThumbGuard, just so that we could get an idea of how far he has come. Since Wednesday, February 1, 2012 we have gone Thumb Free!! I thought that he would naturally put his thumb in his mouth, at night, but he did not. I know it has only been a few days, but the fact that he has gone this long without the guard and without the thumb, makes me hopeful for the future. If he goes the whole week (this week), we will be buying him a balloon and something from Party City(I have no idea, it is what he said he wanted). LOL.

I did find one or two negatives. Because his thumb was so bruised and dry from sucking, I did purchase some lanolin that is used for breastfeeding. That is not helping as much as I would like, so I am going to get him to the doctor to make sure it is ok.  The other thing is the smell. The thumb and the device did have an odor. That is easily fixed by washing it daily and keeping the thumb clean. Of course this is not easy when they are at school, and playing etc all day.

At the end of it all, only time will tell if it works 100%, but so far so good. I would recommend it to anyone at this point.